SPCA (The Society for the Prevention of Cruelty to Animals Incorporated) is New Zealand's oldest and largest animal welfare charity, with 33 animal centres across the country. 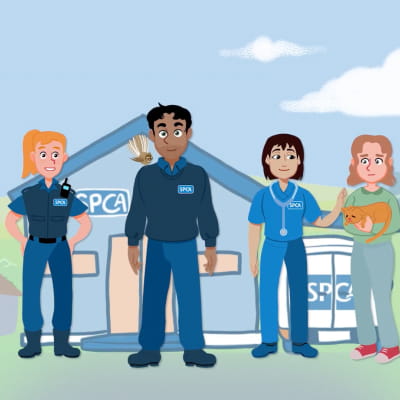 We protect animals from 33 Centres across New Zealand

The SPCA was founded in England in 1824 and is recognised as the world’s oldest and most influential animal welfare organisation.

Along with other things British, the movement to protect animals was brought to New Zealand by the early settlers, and a number of SPCAs sprung up in New Zealand from 1872.

Since those early beginnings, the SPCA has continued to be at the forefront of animal welfare across New Zealand. We have become far more than just a law enforcement agency and a shelter for homeless animals.

Our focus is no longer just on safeguarding animals under the Animal Welfare Act 1999 but has shifted to preventing animal abuse before it happens. To do this, we work with our communities, government and industry to teach people about animal welfare and improve animal welfare laws.

You don’t just have to be an animal lover to work with the SPCA. We seek out exceptional talent that can help us change the way people think and behave, unite our communities and influence change to improve the welfare of animals in New Zealand.