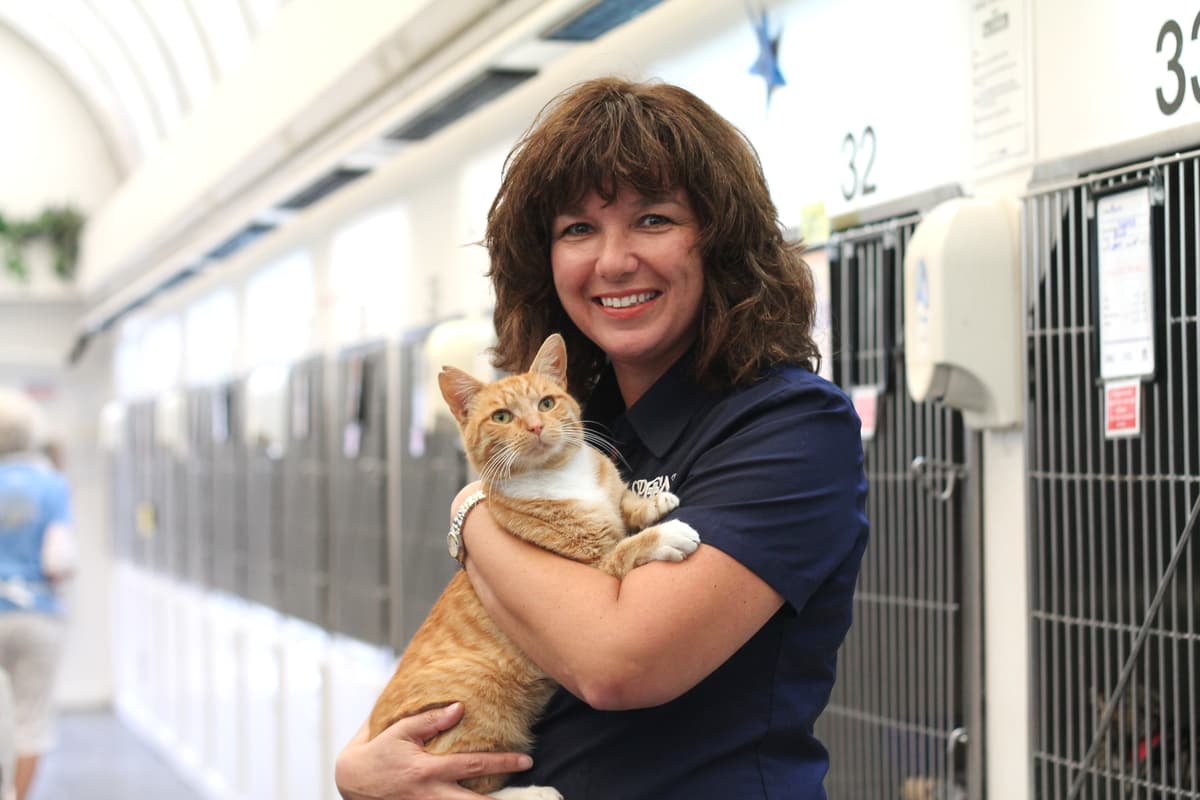 Rona Booth was a very valued member of the SPCA Auckland family and this award was established to honour both her enormous contribution to the SPCA and her love of all animals. Outside of the Animal Village, Rona’s passion was travelling the world and she had many adventures and experiences in many different countries.

To honour Rona’s memory we wanted to recognise three of her favourite things: animals, travel, and employee excellence!

The winner of Rona’s Roar will receive an opportunity of a lifetime: a trip overseas to volunteer at an animal organisation. We know that Rona would be supportive of acknowledging the amazing, dedicated staff at SPCA Auckland in this way.

Our dedicated, adept and respected Animal Welfare Senior Inspector, whose contribution to animals and our community is limitless. Kevin is well known as the public ‘face’ of SPCA but is so much more to his colleagues and the animals of Auckland. Kevin is actively involved in animal welfare, training challenged pooches until they are able to find their forever homes and mentoring his colleagues and the community to achieve the best outcomes for all animals that cross his path or vice versa.

Kevin chose to go to the N/a'an ku sê Lodge and Wildlife Sanctuary in Namibia. You can read about Kevin's trip and see some of his photos below.

2016 was a very tough year, we lost our friend and colleague Rona Booth, which still has a big impact on her many SPCA friends.

In December 2016 my mother also lost her battle with cancer. Mum was a big SPCA fan and completely opposite in personality to Rona. Mum had only travelled once to Australia in her 74 years and she had never been to the South Island.

Winning the Rona`s Roar Award was an honour and a privilege. It really was the trip of a lifetime - the most exciting and scariest thing I have ever done in my life. I wanted to maximize the opportunity I had been given and to honour Rona`s memory.

I arrived in Namibia on the 24th of August 2017. I was met at the airport by an employee of N/a'an ku sê Wildlife Sanctuary in Namibia. I was driven straight to the sanctuary, the driver was about as chatty as Andre. At the sanctuary I was introduced to the organisers. I was then given directions to my accommodation. I had to walk down a bush track for 15 minutes until I came to the last hut called the Genet - that one was mine. My hut was named after a half cat, half possom looking animal. As I unpacked and settled into my new accommodation I was greeted by what I thought at the time was a Domestic Short Hair tabby cat. I thought how ironic that I travelled all that way and the first animal I meet is a tabby cat. As it turned out it was an African wild cat, indigenous to the area. The cats legs and ears were a little longer than a Domestic Short Hair cat.

My Bush hut looked out over what seemed like never ending wilderness. The next morning was my first day of work. I had to meet at 8am at the base camp to find out what I was doing for the day. I walked passed Giraffes grazing on acacia trees and as I walked I could see Wild Warthogs and Baboons in the distance. I was thinking to myself as I walked that I hope nothing comes out of the bush and eats me, as it's only my first day.

I arrived at the meeting point and I was surprised by a few things, a Zebra and an Antelope were patiently waiting with everyone. About forty other volunteers were gathered waiting for their daily jobs to be handed out and I noticed I was the only male and the only person not in their twenties.

One of my team mates was petrified with fear, I pretended I wasn't. The Lions' roars went right through my body.

The volunteers were very kind to me and they spoke to the old bald guy. Our duties for the day were handed out. I was in team Zebra and we were rostered on for night watch. Night watch was spending the night in an elevated platform overlooking the sanctuary. We had to stay out under the stars next to the Lion area watching out for poachers. If we saw any torch light or heard any gunshots we were to radio in to base and let them know. The night was freezing and the roaring of the Lions was very intimidating. One of my team mates was petrified with fear, I pretended I wasn't. Watching the sun come up in the morning was amazing and the Lions put on a big display in the morning coming up near our platform. The Lions' roars went right through my body.

My teams next rostered day was taking thirty young orphaned Baboons out into the bush for a walk. We stopped under a large acacia tree and watched them play for an hour. The young Baboons were a little nervous of me at first but really wanted to be my friend. Once they built up their confidence they were climbing all over me and one Baboon stayed with me for most of the time and eventually he fell asleep on me.

That afternoon we took the older Baboons out for a walk, the older Baboons do not climb over you, they go off and do their own thing and we wait for them under the shade of a tree. When they are ready, one at a time, they start appearing getting ready to go back home. Some of the older Baboons came up to me to groom me but they ignored most of the girls on my team. I was told that they pay attention to big males to make them feel safe. They wrongly thought that if trouble arrived I would protect them.

My other days at the sanctuary were made up of cleaning and feeding all sorts of animals. From Meaah Cats, Porcupines, Mongoose, Monkeys and all the carnivores, Lions, Leopards, Cheetah’s, Desert Lynx and Wild Dogs.

One of the wild dogs in a pack of fifteen was very sick and needed to be tranquilised for a veterinary examination. It was a dangerous situation trying to remove the wild dog from the pack ensuring the pack did not turn on the sick dog or attack the vet. The wild dog required surgery that could only be done in town. I assisted the vet in transporting the wild dog for surgery and then days later I assisted in returning the dog back into the pack. I was so lucky to get to spend time with the African Wild Dogs.

One of my rostered days was with the research team, we were checking 100 live rodent traps. We were taking out the rodents and recording all their details, measurements and weights. I was very pleased with myself as I am scared of rats and I didn’t freak out and I was hands on with all the rodents. While we were recording the information a call came through from a farmer that lived a four hour drive away. He had been losing stock and had set a live trap on his property. He had caught a large male leopard in the trap and was reluctant to shoot it. He was calling N/a `an ku se wildlife sanctuary to talk about other options. The farmer agreed for N/a `an ku se to come and tranquilise the leopard, put a tracking collar on and release it.

This was an amazing experience. We were weighing and measuring rodents in the morning and by the afternoon we were weighing and measuring a male leopard. We had the tracking collar on and recorded all the measurements and weights, the vet had given the reversing drug and we retreated to the vehicle. As we were watching the leopard slowly come around, two donkeys turned up walking closer and closer to the leopard. The leopard was semi drugged but still very dangerous, we had to start up the vehicle and drive between the leopard and donkeys tooting the horn to drive off the donkeys.

The farmer got to name the leopard and the farmer gets weekly GPS location updates for the leopard for two years until the collar comes off. If the leopard comes back to the area the farmer will move his stock closer to the house.

I have been asked what was my highlight of the trip, it is not an easy question to answer.

I have been asked what was my highlight of the trip, it is not an easy question to answer. Was it taking the orphaned Hyena pup for a walk with a Jack Russell, or was it helping remove a sick African wild dog from its pack or helping collar a wild Leopard caught in a farmers trap? The whole experience was a highlight. It gave me time to reflect and really appreciate life. SPCA gave me some Rona`s Roar t-shirts and lots of people asked me "what’s Rona's Roar?" And I told them about Rona and the SPCA honouring her memory. They thought the SPCA was amazing. I was also given Rona’s Roar kids shirts which I gave to the local school. I also gave them some Kiwiana shirts, a Yeah Nah Bro and some Aotearoa ones. I also left SPCA paw print pins for the kids. Unfortunately, it was the school holidays while I was there but I know that kids are running around in Namibia today wearing Rona's Roar t-shirts and SPCA paw print pins.

After my two weeks in the sanctuary I spent some time travelling. I went to the corrugated iron towns were everyone lives in sheds without electricity or water. I went through a desert and found a place called Solitaire that had old classic cars sitting in the sand dunes. I went sand boarding in Amy’s home town.

If we took a leaf out of Rona's book and put 100% into everything we do, our achievements will be unlimited.

To finish with I wold like to thank the Booth family, Jet Park Hotel and the SPCA for the amazing once in a lifetime opportunity. I will treasure my memory’s for a lifetime.