This Prevention of Animal Cruelty month, animals like Marvel need our Inspectors...

This Prevention of Animal Cruelty month, animals like Marvel need our Inspectors... 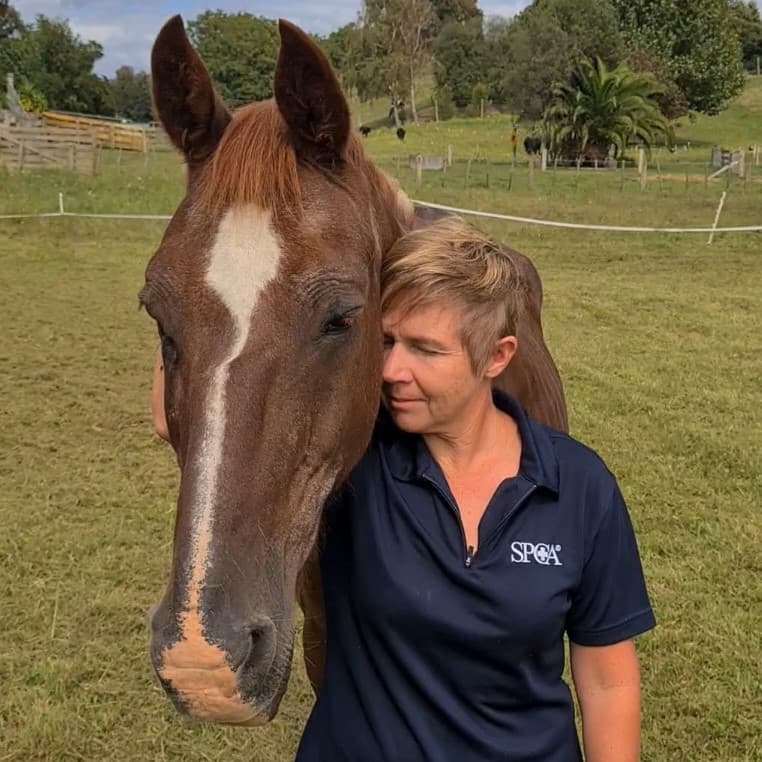 Marvel is one of the most resilient, inspiring animals Inspector Liisa has ever met. And in this work... that means a lot.

April is Prevention of Cruelty to Animals Month. Here at SPCA, that is what we are all about. It’s in our very name, and we are dedicated to doing everything we can to prevent animal cruelty in New Zealand. It is what drives everything we do.... and what drives Inspectors like Liisa on the hardest days.

One of those days came in January, when she met Marvel, a very special horse.

SPCA received a call about a horse and foal on the side of the road in a rural area, and both were reported to be in dire condition. Inspector Liisa rushed out to investigate, and truly couldn't believe the state the horse was in.

On arrival, she found a lame, emaciated mare with two untreated gunshot wounds to her neck. The site was teeming with infection and maggots. Her skin was scalded from the fluid leaking from the wound, which had also burnt its way through her mane. She was riddled with lice and her swollen belly indicated she was suffering from a severe case of worms. Her hooves were so long she could barely walk.

On top of all of this, this poor horse had a 4-week-old foal. The little one was skinnier than he should have been at this age, but mum was doing an amazing job under the circumstances at even keeping her baby alive.

Most upsetting though was trauma to Marvel’s face. Alongside the severity of her bullet wounds, it’s almost something that could be overlooked at first. Her face had been staved in, her skull permanently disfigured by massive blunt trauma. The vet said this happens with extreme force like being hit with a post.

That first day, Marvel was completely shut down. She was in unimaginable pain, and she didn’t even acknowledge Liisa who worried her trauma – physical and mental – was too much.

But Marvel had survived against all odds until now, and all on her own. Not only that, but she had kept her baby alive. She had put so much effort and energy into making sure they both survived… Inspector Liisa knew she had to do the same.

It was a very emotional rescue. Getting her gently into the float, Liisa felt a small spark of life from her for the first time. It was then she felt Marvel's trust in her instantly click. The horse walked straight in, and didn’t stress when her baby was handled to get him in too. She just watched quietly and gave a few soft whinnies.

"I could talk about the journey we’ve since gone on together, Marvel and I. Her coming home with me for the hands-on, specialist foster care she needs. Daily flushing of wounds. Confidence building and character emerging. Seeing her baby go off into a loving forever home with a paddock mate the same age to grow up with. The first whinny when she saw me approaching. The first happy trot. The gradual weight gain. The way she’s learned to love being groomed. The palpable relief at finally being looked after.

But instead, I want to talk about the bigger picture here. The puzzle that Marvel is just one piece of.

Animals in New Zealand deserve better. Too many are victims of a total lack of empathy or care. Marvel’s injuries suggest she was subject to a failed euthanasia attempt, and was abandoned roadside when attempts were unsuccessful.

Every day on this job I meet animals who have suffered so much, and so unnecessarily, because of humans making bad decisions by them. Part of my work as an SPCA Inspector is to work with these very people, not just the animals they hurt. The people are the ones where preventative change needs to happen.

Trust me, I understand how easy it is to feel angry when you see this sort of active cruelty. How much you want to punish those responsible. Sometimes - like in Marvel's case - the people responsible can’t be found. And even when they can, punishment isn’t always the best option.

It’s a short term solution, but one that doesn’t tackle the problem in the long term. I could punish one animal abuser today, and tomorrow I will be rushing to rescue the victim of another. And on and on it goes.

It’s why we work with owners where we can to support them in changing their ways. Providing advice and guidance, and teaching them the value of animals’ lives. It’s why – despite it all – I try to lead with kindness every day on this job.

Can you support me in that mission... for Marvel? For all those animals who we can prevent from meeting her fate."